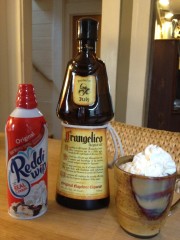 I don’t feel like I got a lot done this weekend. Here is the rundown:

Friday night is our standard television watching date with our friend. I am teaching her how to cook so I showed her how to make my GF/DF Fish Chowder, which was delicious (while I drank copious amounts of Frangelico in decaf coffee with tons of whipped cream). Then we settled in to watch five episodes of The New Girl, which made me hurt myself laughing, and two episodes of Supernatural, which was meh. I should note that I’m a terrible TV watcher. This Friday thing is about all I can take lately. I know I used to like to watch TV so I’m not sure what happened here.

For some reason talking about watching TV is making me think about some of the the movies we have seen recently that we really liked:

The Guard
Super 8
Chronicle
Tucker and Dale Vs. Evil

Next up is the movie Local Hero which is sitting on my dining room table waiting for me to watch it.

Okay, back on topic…

Saturday I had lunch with a friend and her daughter in SW Portland, and then came home and sorted through all of my fine art paints. I threw out the dried up crap and made three lists: paint that is essential that I need to purchase; paint that I would like to have but isn’t essential; and paint I would love to have if money isn’t tight.  I went through all of the photographs that I took and went in and cropped several of them to turn into paintings. I also did some cooking. I made some homemade chicken stock to use in future recipes and to enhance the dogs’ dry food. And I made coq au van, which we had for dinner.

On Sunday, I was a bit of a slug. I Skyped with my friend in Italy and we decided on a time for Mike and I to go visit him (and make a side trip to Ireland). I managed, with Mike’s help, to print out all of the photographs that I had decided to use for paintings, which took longer than expected because some refinement in terms of cropping and framing needed to occur. I made a really delicious curried soup – with sweet potato, carrots, onion, celery, lime zest and juice, freshly grated ginger, madras curry powder, lemon grass, homemade chicken stock, and coconut milk – for lunch. Then I drank tea and spent a lot of the day lying down under a comforter and reading.

So, typing it up it looks like a bunch of stuff got done, but there was a whole lot of lying down so I’m feeling confused.

I must say I am really enjoying my newly redone studio. I mentioned the project briefly before but never followed up with pictures. I’m close enough to Done that I feel like I should take some pictures and call it “done” even though I will continue to tweak things.

It is Monday and sunny here in Portland. We will be back to rain tomorrow so I’m making note and appreciating the hell out of it. Mike told me today that Portland set a new record for the most amount of rainfall in one month (7.89 inches). My repsonse: Well, I feel better about all the whining I did about it.

Hey. I’m nothing if not self-aware.