Yeah. I’ve been shitty about posting. In my defense 2013 has kind of been kicking my ass. There are some good things going on….but there have been some challenges too.

My mom got in a very bad car accident, which is bad enough (cracked sternum, 6 cracked ribs, one crushed knee, and a broken foot) but she was also in the middle of packing to move. So my sister and I flew out to Massachusetts to help her and also pack and get her all moved in and unpacked. While we were doing this we were also still working full time remotely. It was pretty intense and also extremely expensive.

I almost burned our house down, with our dogs in it, by leaving a pot boiling on the stove while Mike and I went to a lecture on smart cities. Thankfully everything turned out okay. The house was fine except for some very smelly smoke damage that was not bad enough that we couldn’t clean it ourselves. I don’t make light of how much work it was to get it cleaned and get the smell out but it could have been so much worse. And thankfully we have amazing neighbors and our dogs were fine. Our front door needs to be replaced but the insurance will help pay for it.

Mike finally had hernia surgery and it thankfully went well but it was a lot of painkillers and ice packs and eating in bed. He was a trooper.

I started a running program and fell in love with running….and promptly had my back give out on me and was in some serious pain for three straight weeks. So I think running is off the table for now. I did manage to get through an acupuncture appointment, with Mike holding my hand the entire time, and my needle-phobic self only cried twice. That will clue you in to how much pain I was in…I let someone stick needles in my body which terrifies me. It helped though.

And I had a tense day trying to make sure people I am close to in Boston were okay after the Boston marathon bombing. Thankfully they all were/are fine but it was a tense 24 hours. Even though I thought I had checked in with everyone I felt like I was going to get a phone call that night telling me some bad news (a lot like 9/11) but thankfully everyone was really okay. It was wonderful how everyone seemed to focus on how people pulled together in a crisis and how they all helped each other out under such bad circumstances. I was really proud of Boston and the rest of the country for focusing on the good side of human nature. The man-hunt the next day was insane; it was like some crazy scene out of a Jason Bourne film.

I took a recent trip to California and went to some small towns west of Redwood City – Santa Cruz, Capitola, and – my personal favorite of the day – Pescadero. Driving back to Redwood City from Pescadero there is a lot of farmland, which is the picture at the top of this post. We bought local artichokes and locally made chicken/artichoke sausage from Arcangeli Grocery in Pescadero. (Click to check them out; you can order their stuff online.) I also went to the Shipyard Artists Open House and looked at some very cool art. California really has it going on for painting. It was refreshing because I am sorry to say I have not been overly impressed with Portland in that respect. I also ate the second best pizza I have ever had out of a food truck in front of building 101. (The absolute best was at the Brooklyn Flea Market a few years ago – but I mean…New York having good pizza is a given.)

Our back yard is looking the best it has since we moved in. We removed three of the planter beds and are now left with nine, which is a much more sane number. We have been keeping up with the weeding (with help!) and even with back problems I managed to plant some things (radishes, escarole, lettuce, onions, green beans, beets, cilantro, thyme, oregano, chives, and parsley – the chard from last year is in its harvest state, the artichoke plant is going strong, and we had some potatoes pop up from missing a few from last year’s harvest). I’ve decided this is the year I fully can and preserve my harvest. The fruit trees are really beginning to bear fruit and I think it is time to get my tomatoes in. I invested in some canning gear from Miradoor, a local little shop. And I purchased “Canning for a New Generation,” by Lianna Krissoff at our local Powell’s on Hawthorne. I think I am ready to go and this book is so great about breaking down the canning and preserving process in a way that is simple and easily understood (takes a lot of the botulism terror out of it…which is…you know…really nice).

May 15 marks me and Mike’s third year in our house, and May 22 marks our fourth year together as a couple. I am feeling very blessed in life even with the early 2013 challenges.

And for your viewing pleasure…some very cute pictures of our family dogs. 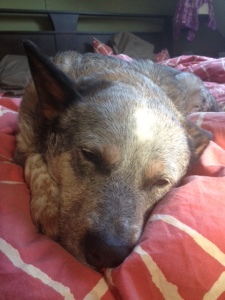